Happy Release Day Angela! I am about 30% through Fated Fortunes and I am LOVING IT! It’s another great paranormal romance!

I knew I would love this book because Angela never disappoints when it comes to detailed paranormal worlds full of magic, mystery and adventure! 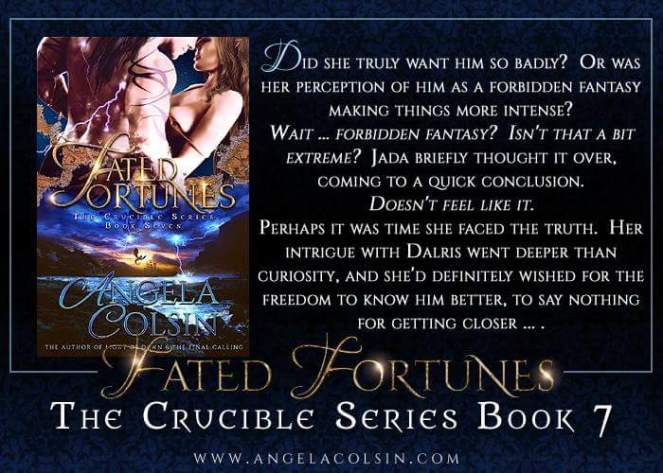 Dalris Dra’Kai has served as the Terran head of his Draconian House for many long years, assigning jobs, collecting payments, and conducting family affairs. It’s a responsibility he takes seriously, though lately he’s longed for something more fulfilling than organizing business matters—and a good start would be finding his eternal mate.

But eight lonely centuries hasn’t offered much hope, and it isn’t until an unexpected encounter with a mysterious figure from his recent past that Dalris learns his mate isn’t what she seems. Furthermore? She’s on a treasure hunt of her own, but the prize she seeks isn’t riches or esteem … .

Jada Tavar has dedicated her life to finishing her grandfather’s work, and the elven antiquarian wasn’t searching for just any mundane treasure. Instead, he sought the true fate of the lost House of Rinora, a dangerous quest that inevitably cost his life. So the last thing Jada needs is a centuries-old draconian recognizing her as his mate, specifically when elves are forbidden from mating with their kind.

But Dalris is seductively persistent, and she finds the draconian more than just a little intriguing. His wicked promises and passionate kisses are impossible to ignore, and the closer they get, the more Jada wants him in her life. Yet the conclusion of her quest may reveal a truth that would condemn their fated connection for all time.