Parker is a defensive hockey player for the NHL. A damn good one too. His life revolves around hockey and he enjoys the perks that come with it…bunnies. Woman, after woman, after woman. He can only keep it up for so long before everything comes spiraling down…and it does. After a night with the wrong “puck bunny”, he is forced off his winning team and traded to a smaller team. He didn’t think anything could stand in his way of getting wasted and enjoying all the puck bunnies until her.

Charlotte “Coach” Coachmen is Parker’s wakeup call and new agent. Coach must now turn this disaster of a client around. She see his potential but not the effort. She knows there is much more to Parker than the good looks and his player ways, he’s hurting and covering it up. They both may have something in common. Coach knows this will be a difficult job especially since Parker is jaw droppingly sexy and knows how to sweet talk to women. This has to stay professional. This is a job. Only a job…right?

I LOVED LOVED LOVED this read. I am so impressed with this story. Jillian Quinn has done it again! She has created yet another romance story (check out Corrupt Me) that is complex, fast paced, HOT and has well developed characters. Everything I enjoy and hope for in a romance. I am a fan!

Like I said, this book was everything and more than I expected. It’s a sports romance that is easy to understand and follow. (You don’t have to be an avid hockey fan to understand what is going on.) The plot is set up to be thrilling, captivating and sexy: Bad boy is forced to work with a good girl.

The main characters, Parker and Coach, have HOT chemistry and fun/awkward banter that kept me wanting more but that is not all. Both of these characters have detailed backstories and experiences that have brought them to a certain point in their lives, a point in which they must learn and grow, with or without each other. Seeing Parker and Coach grow and evolve throughout the story is what kept me interested!

Overall this is a story that will make you FEEL! It’s so good. It’s LIVE on Amazon. Check it out!

Former collegiate athlete and successful sports agent, Charlotte “Coach” Coachman, is a straight shooter who has a very strict policy—no dating clients. The loves of her life are coaching little league basketball and managing the careers of her players, leaving no room for men.

Coach hasn’t met an athlete she couldn’t handle and a deal she couldn’t close—until she meets Alex Parker, the NHL’s most notorious bad boy both on and off the ice.

Alex is the best defenseman in the league, breaking records along with hearts. He’s made a name for himself as a womanizer, and after a scandal involving the owner’s granddaughter, Alex is traded to Philadelphia. Still reeling from the loss of his father, Alex is on a downward spiral, drowning himself in booze and women, until Coach takes him under her wing.

She might be attracted to the sexy hockey star, and certainly not immune to his charms, but Coach can see that Alex needs her help, and coaching players is what she does best. Now that the lines are blurred and the passion between them is too strong to deny, Coach has to decide if Alex is worth making an exception to her rules. 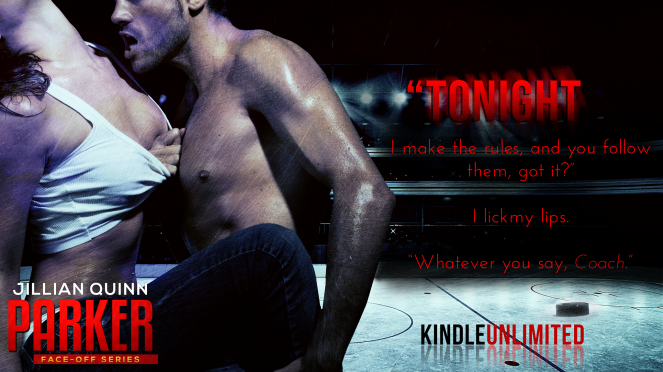 Jillian loves Mafia men, sports, bad boys, dirty talkers, strong female characters, and books with plenty of heat, all of which you will find in her books. As a lover of all things bookish, she has a serious book hoarding problem and runs a book blog in her free time. When she’s not reading, writing, or blogging, she’s obsessively fangirling over hockey players and can be found wherever she can catch the next hockey game.