In His Corner by Vina Arno

No sex for almost a year could kill a guy, but when you’re the boxer known as the Juggernaut, it’s the price you pay for turning pro. Tommy’s fully dedicated to his craft, until he meets the incredibly gorgeous Dr. Siena Carr. Now he’s looking forward to taking on this prim and proper lady in a wet and wild work-out…

Siena has seen many patients come through the ER, but none as sexy as Tommy Raines. With a nasty cut over his eye, she knows he needs stitches, but after he takes off his shirt, she needs some air. With rock-hard abs and taut biceps, it’s clear this man takes care of his body. And all Siena can think about is letting him take care of hers…”

Fooling Around by Noelle Adams

Goodreads Blurb:
“In this steamy novel from New York Times bestselling author Noelle Adams, a notorious tech mogul makes a mild-mannered woman an offer she can’t refuse. What he gets is a battle for control—and a million-dollar affair.

Eric Vincent isn’t in the habit of asking for help. As the founder of a lucrative sports videogame franchise, he’s accustomed to getting his way and enjoying the fruits of his hard-earned success. Then all his illusions of dominance are shattered by a skiing accident that leaves him hobbled, facing a string of surgeries and months of immobility. The only way he’s going to survive is with someone by his side to anticipate his every desire. Someone who will devote every waking second to his comfort. Someone like Julie Nelson.

Julie’s life revolves around other people: her students, her parents, her sister. But even she has her limits. Julie has zero interest in playing personal assistant to Eric Vincent, a man who’s as arrogant as he is charismatic . . . until he ups the salary to one million dollars for three months’ work. Soon Julie’s struggling to bite her tongue—and resist the chemistry that draws her to Eric. But after one scorching kiss, Julie decides it’s finally her turn to be selfish. And this time, she’s going to get what she wants.

Includes a special message from the editor, as well as an excerpt from another Loveswept title.”

Stacked Up by Sidney Halston

Goodreads Blurb:
“Opposites attract in this seductive novel from the author of Against the Cage (“Funny, steamy, scorching.”—Toni Aleo), with a chiseled MMA fighter falling for a single mom who could use a real man in her corner.

Working two jobs to support her infant daughter is harder than anything Penny Richards has ever done, but it sure beats living under the rules of her stepfather, a television preacher who demands a picture-perfect family. And if Penny hadn’t struck out on her own, she never would have met Travis Calhoun. The intensely physical heavyweight brawler has a way of drawing out her wild side. But Travis lives fast, with no responsibilities—and that just isn’t for Penny.

Most of the women in Travis’s circle wear tight clothes, high heels, and tons of makeup—not pearls or plaid headbands. But once he works past Penny’s inhibitions, Travis discovers a kindred spirit who longs to trust someone with her body, and her secrets. Still, Travis can’t help but wonder if this rich girl is just slumming it before she returns to her privileged life. Now it’s up to Penny to prove that she wants her hard-edged, hard-loving fighter just the way he is.” 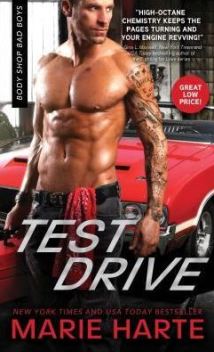 Goodreads Blurb:
“GET TO KNOW THE BODY SHOP BAD BOYS
Johnny, Foley, Sam, and Lou are the rough and tumble mechanics of Webster’s Garage. These reformed bad boys are used to living fast, but it’s the women in their lives who take them from zero to sixty in a heartbeat.

JOHNNY
Johnny Devlin’s a charmer with a checkered past. He has had his eye on scorching-hot bartender Lara Valley for ages, but she’s rejected him more than once. That doesn’t mean he won’t come to her aid when some dirtbag mauls her. When she asks him on a date as a no-strings-attached thank you, he can’t say no. And then he’s saying nothing but hell, yes.

Praise for Marie Harte’s McCauley Brothers series:
“Packed with sass, sensuality and heartwarming emotion…an absolute delight!”-Romance Junkies for What to Do with a Bad Boy
“Funny, addicting, and full of hot sex scenes.”-Booklist for How to Handle a Heartbreaker””

To Love A Wolf by Paige Tyler 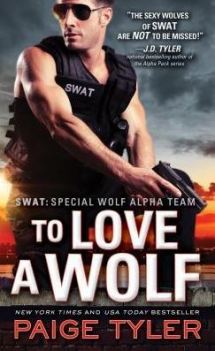 HE’S FOUND THE ONE…
SWAT officer Landry Cooper is certain Everly Danu is The One. The problem is, she has no idea what Cooper really is. And as much as he wants to trust her, he’s not sure he can share his deepest secret…

When Everly’s family discovers Cooper’s a werewolf, her brothers will do anything to keep them apart-they’ll kill him if they have to. Everly is falling hard for the ridiculously handsome SWAT officer, and she’s not about to let her brothers tell her who she can love… Until Cooper’s secret is exposed and she discovers the man she thought she knew is a monster in disguise.

BUT CAN HE KEEP HER?

Readers are hungry for Paige Tyler’s SWAT and X-Ops series:
“The action is nonstop and topnotch.”-RT Book Reviews
“Hot and wild.”-Cynthia Eden, New York Times and USA Today bestselling author
“The sexy wolves of SWAT are not to be missed!”-J.D. Tyler, national bestselling author of the Alpha Pack series
“Wow, just wow!”-Fresh Fiction”

One thought on “What am I reading?! Book reviews coming soon…”